His 1956 "Aha!" moment was the genesis of a new method for treating back pain - and after refinement, the basis for an institute now in 28 countries. And the man behind the idea? "Although Robin McKenzie received many accolades and awards internationally and locally, he was just a humble New Zealander who had vision, tenacity, courage, and an amazing depth of compassion which led him always to want to help more and more people, in whatever way he could." - Celia Monk MPNZ in her obituary written for Physiotherapy New Zealand members 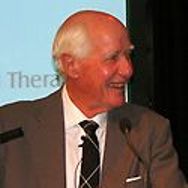 "Robin was a man of great vision and pioneering spirit... a sign of his tenacity and curiosity is that over the next few years and decades he worked hard at developing the system we all now know as the McKenzie method of Mechanical Diagnostics and Therapy (MDT)."

Empowering patients to treat themselves 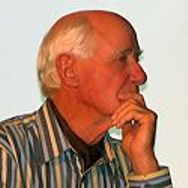 sold attest to their popularity. Yet he published the first one himself (in the 1970s) because no publisher would accept it!

"The answers to most problems are within the patient," Robin said in the oral history recorded in 2011 for Physiotherapy New Zealand. "Exhaust all possiblities using the patient's own movements and positions before you apply external force," he told physios. "When you've exhausted all the patient's own potential, you may need to apply more pressure with your hands... I reckon you have to put your hands on in about one out of ten."

Listen to Robin's oral history. It's in Part 4 that he talks about his chance observation of hyperextension which he then observed and trialled with many patients, on his way to establishing the McKenzie Method.

His family Robin described as, "The truly strong spine of my life." They were his wife Joy, four children, and six grandchildren. As the McKenzie Institute obituary describes, "They 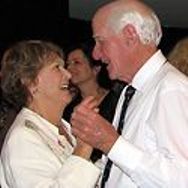 supported him through the struggles of his early professional career, celebrated the accolades he received for his achievements, and supported him in the difficult times of his illness" (at the end of his life).

Robin's other absorbing interests were sailing and gardening. At his funeral there were humorous accounts of near-disasters during his sailing adventures.

Read the obituary on the McKenzie Institute site. 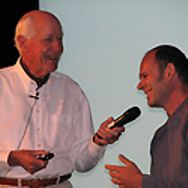 Celia Monk refers to his encouragement and support for young staff members. He also set up scholarships in New Zealand for new graduate physiotherapists to learn the MDT.

Born in 1931, Robin went to Wairarapa College and Otago University, then the New Zealand School of Physiotherapy in Dunedin where he graduated in 1952. He did compulsory military training with the army medical corps, and later undertook officer training, after which he had to do two weeks' training every year. "We had enormous fun," he says in his oral interview. "We were all amateurs playing at being doctors and physios in the army."

At age 23 he grabbed the opportunity for his first  private clinic. It was in Kelburn Chambers, on the Terrace in 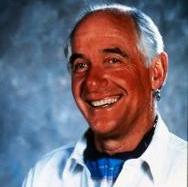 Wellington, and had been started by an early practitioner in 1920. Being close to Parliament, he treated the Prime Minister Sidney Holland and other MPs.

In 1982 Robin formed the McKenzie Institute International, to educate clinicians in MDT and support research. He gained much recognition nationally and internationally and many honours, including an Honorary Fellowship of the NZ Society of Physiotherapists (1985) and Honorary Life Membership of the NZ College of Physiotherapy (1998). He was made a Companion of the New Zealand Order of Merit in 2000.  In 2004, members in the Orthopaedic Section of the American Physical Therapy Association named him the number one most influential and distinguished physical therapist in the field of orthopaedic physical therapy.

Robin wrote six books and many journal articles, and was in huge demand internationally as a speaker and consultant.

On 13 May 2013 Robin died of cancer, surrounded by his family, at his home in Raumati South, New Zealand.

Many thanks to the McKenzie Institute for their help and for use of their photos.

Visit the McKenzie Institute site for more about Robin - tributes from all over the world, more details of his life, and a photo gallery.